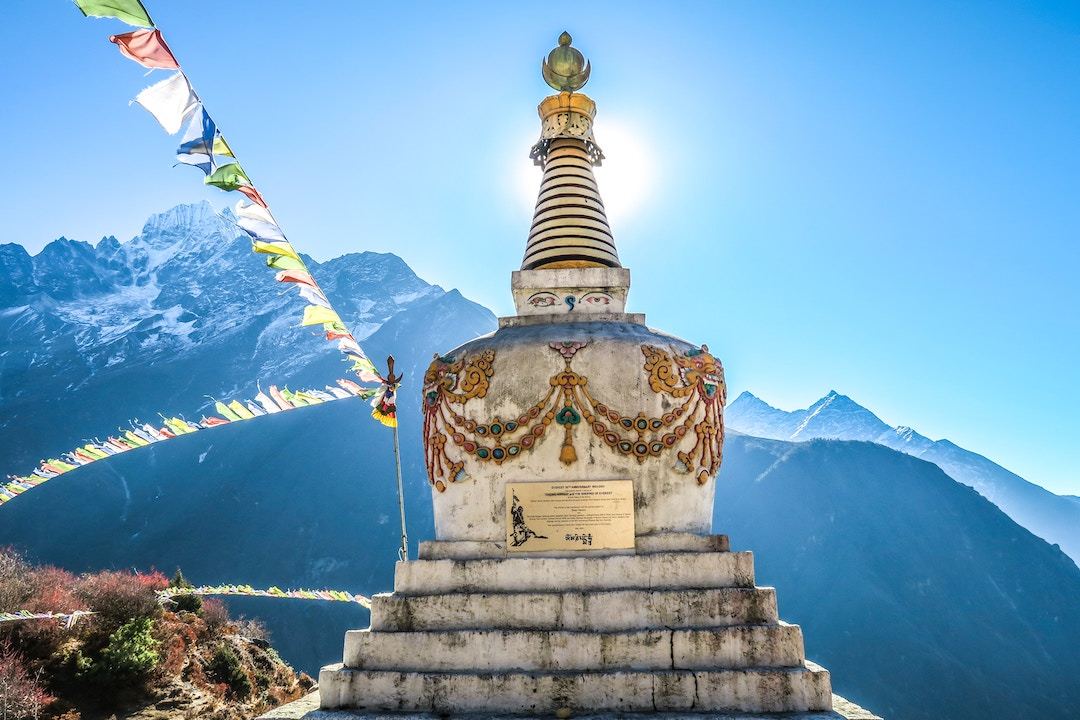 We’ll be visiting Nepal & Bhutan at the end of summer BUT traveling to a number of different climate zones. Thus, the weather will vary significantly during different segments of the trip. For a rough guideline, see below:

As the summer monsoon rains wind down during the second half of August, travelers to Nepal will be welcomed by dazzlingly green rice fields & less crowded streets, temples, & trails.

August is a good month for exploring the monasteries and temples of the kingdom. Despite some rain, the landscape is lush and green, with the summer wildflowers blooming in the meadows and fields.

The voltage in Nepal & Bhutan is 220v-240v. Please see link below for more information. Bring a plug adapter to charge camera batteries and any other electronics you may need. There are THREE types of plugs in Nepal & Bhutan and you should bring an adapter for both.

Both Nepal & Bhutan require tourist visas for US passport holders:

Nepal: $25 / Visa is easily obtained on arrival when going through immigration at the Kathmandu International Airport. (http://www.nepalimmigration.gov.np/page/tourist-visa)

Bhutan: This visa is INCLUDED in our program. Our ground team has pre-arranged and obtained tourist visas for everyone in the group and our tour director will hand these out during the trip.

Nepal: The unit of currency is the Nepalese Rupee, which is pegged to the Indian Rupee. Currently, 1 USD = 109 NPR.

ATM/Credit Cards: There are lots ATMs in Kathmandu & Pokhara which accept Cirrus, Maestro, and Visa bank cards. Money exchange offices can also be found easily throughout both cities. Major credit cards are widely accepted at hotels, restaurants, and fancy shops in the Kathmandu Valley and Pokhara only.

Cash: There are exchange counters at the international terminal at Kathmandu’s Tribhuvan Airport and banks and/or money changers at the various border crossings. Pokhara, Kathmandu and the major border towns also have official money-changing facilities.

SIDE NOTE: The Battle of the Haggle

Sure, things are cheap to begin with and you may feel silly haggling over a few rupees, but keep in mind that if you’re given a verbal quote for an unmarked item, it’s probably (but not always) twice the realistic asking price. Use discretion though, because items that are priced ridiculously low to begin with are hardly worth reducing further — either you’re being conned or you’re being cruel. To haggle effectively, make a counteroffer under half price, and don’t get emotional. Protests and adamant assertions (“This is less than it cost me to buy!”) will follow. Stick to your guns and see what transpires; stop once you’ve reached a price you can live with. Remember that once the haggle is on, a challenge has been initiated, and its fun to regard your opponent’s act of salesmanship as an artistic endeavor. Let your guard slip, and he will empty your wallet. Take into account the disposition and situation of the merchant; you don’t want to haggle a genuinely poor man into deeper poverty! And if you’ve been taken (and we all have), see it as a small contribution to a family that lives on a great deal less than you do.

Bhutan: The unit of currency is the ngultrum, which is pegged to the Indian rupee. Currently, 1 USD = 68 BTN

ATM/Credit Cards: There are ATMs in most main towns, but it would be wise not to rely entirely on being able to use plastic. Credit cards are accepted in some hotels and souvenir shops, but only in major cities or well-touristed areas.

Cash: All foreign groups/tourists to Bhutan require pre-paid trips, including ours. All meals are included. So, in theory you could manage in Bhutan without any local currency, though we recommend changing $50 to $100 to pay for drinks, shopping, & tips.

If you plan to make a major purchase, for example textiles or art, consider using US dollars in cash. Most shops will accept this, and it can save you the hassle of exchanging a large quantity of money in advance and then attempting to change it back if you don’t find the exact piece you were looking for.

Bargaining is not a Bhutanese tradition, and you won’t get very far with your haggling skills here, except with trail-side vendors on the hike to Taktshang (Tigers Nest Temple) and in the local handicrafts section of the Thimphu Weekend Market.

*Tipping guides and drivers is an expected practice similar to tipping waiters and waitresses in the USA.

IMPORTANT: We are not doctors and do not have the authority to give medical advice, including vaccine recommendations. Please consult your doctor and the website below and do as you see fit.

No vaccination proof is “mandatory” in order to get through customs however for your own personal safety you will want to consider malaria pills (very low risk) & hepatitis A & B, & the typhoid vaccine is also highly recommended. Please consult your physician for more information and recommendations.