It’s been a few years since we’ve been to Eastern Europe and it’s time to go back! We’ll explore the culture, food, architecture & natural beauty of Poland, Czech Republic, & Hungary! This time we’ve added more time to explore the Czech Republic, an incredible country with so much beauty outside of Prague that few tourists explore (we’ll go to Prague too of course!). In Pol 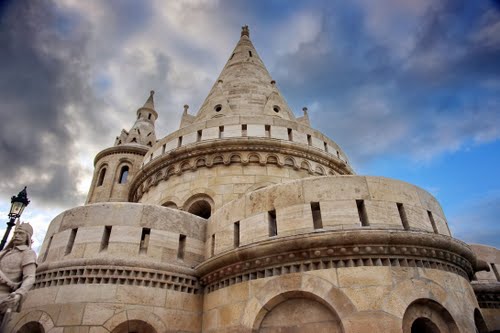 and, the historic city of Krakow is extremely well preserved and a delight for our cameras and history buffs, not to mention the amazing food! In Hungary, we’ll visit the astounding waters of Eastern Europe’s largest & shallowest body of water, Lake Balaton. And of course Budapest, with it’s legendary Danube River splitting the beauty in half between the banks and offering fantastic castles, hot springs, restaurants, museums, & so much more! 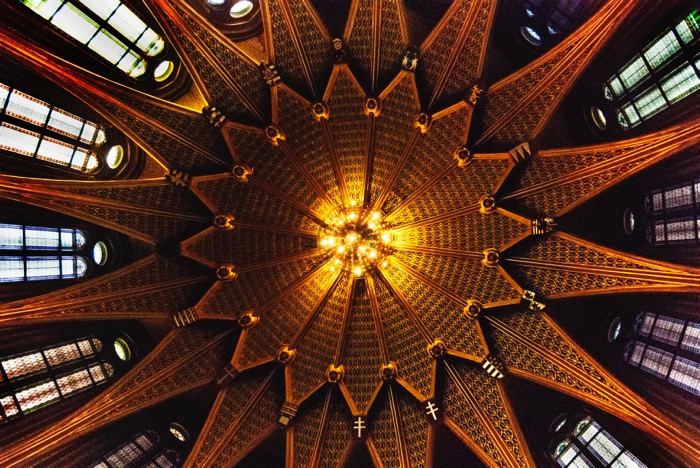 * 9 nights/10 days throughout the best of Eastern Europe 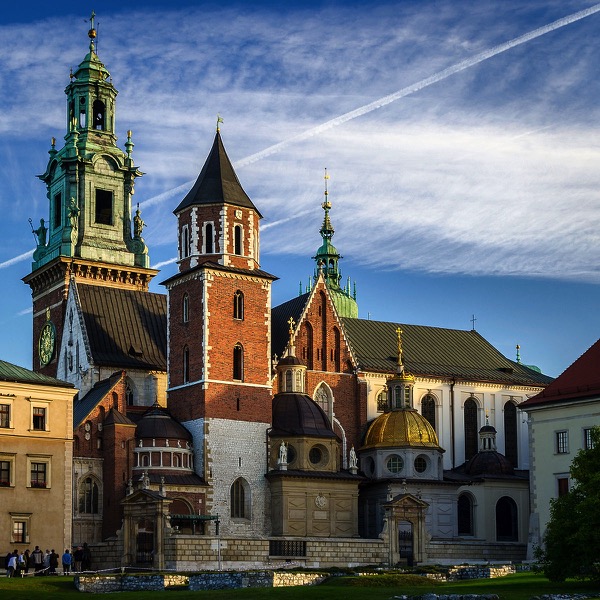 One of the country’s most vibrant cultural centers, with more than one thousand years of history, Krakow is clearly the spiritual heart of Poland. “If you believe the legends, Kraków was founded on the defeat of a dragon, and it’s true a mythical atmosphere permeates its attractive streets and squares.” -Lonely Planet 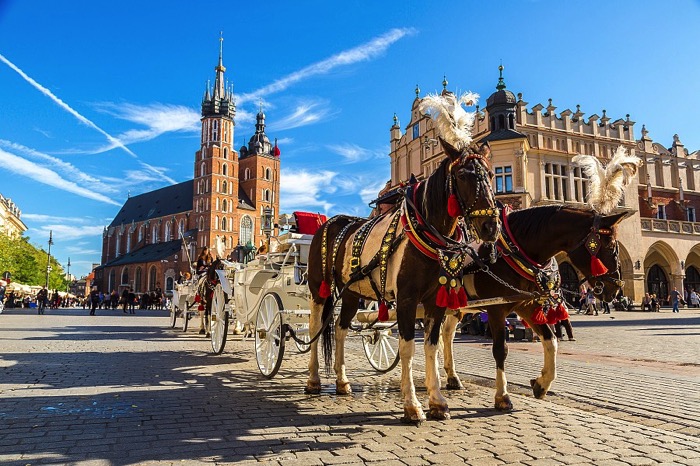 – Auschwitz-Birkenau: Experience & learn about the ever important and tragic history of the world’s most infamous concentration camp during the Nazi Regime. 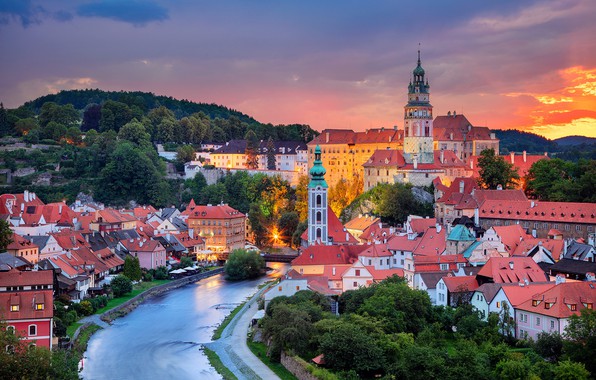 If you put the best parts of Prague in an even more beautiful surrounding with green rolling hills & pastures as her backdrop, you get Cesky Krumlov (not to mention it’s way less 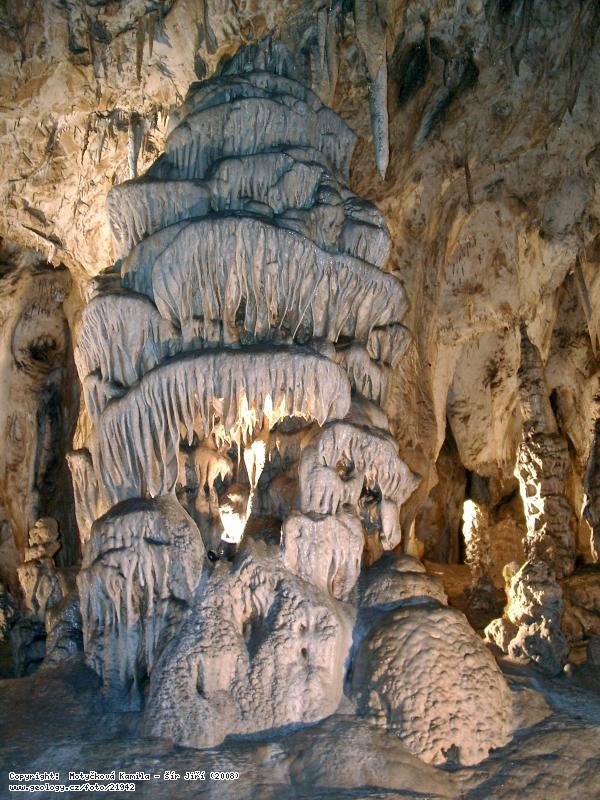 – Sloupsko-Šošůvské Caves: En route to Cesky, we’ll make a must stop at this mind boggling wonder of nature. These are the largest accessible caves in the Czech Republic with an extensive complex of caverns, corridors, and chasms. An exciting guided adventure into the abyss will be a real highlight during our time in this remarkable country. 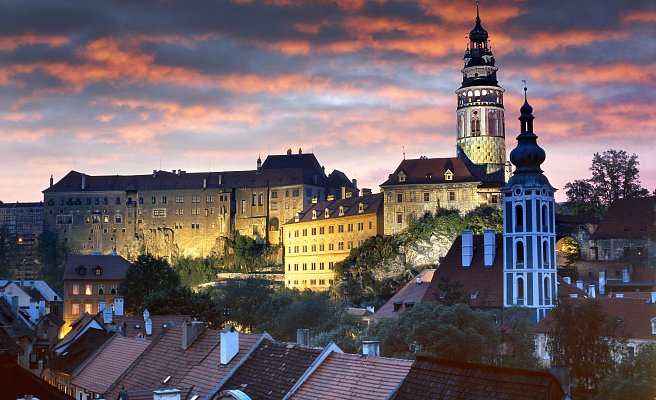 proud overlooking the quaint historical epicenter of Moravia. A delight for our eyes and camera’s inside & out; lavish interiors, fascinating history, gorgeous castle gardens, and architecture that brings us back in time!

– Castle Tower: The iconic symbol of the great history and beauty that is Cesky Krumlov. Once characterized as “The towerest of all towers”, we’ll have the opportunity to climb all the way to the top & witness the 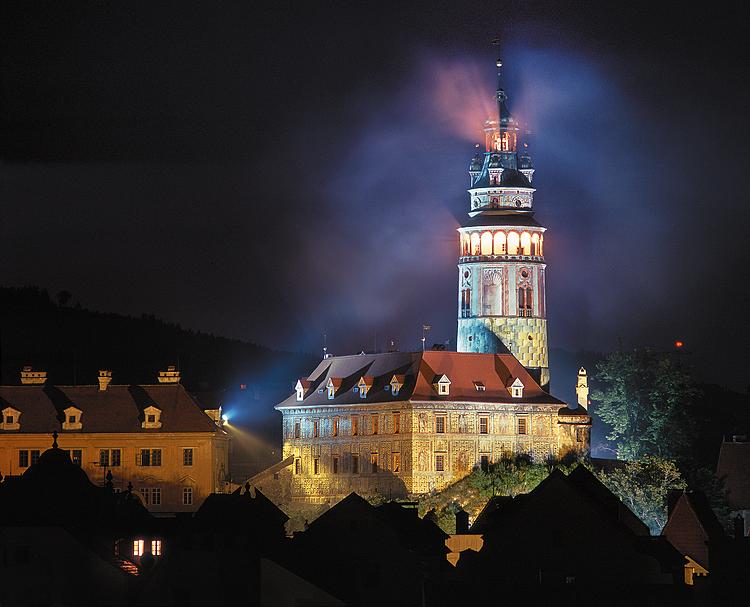 outstanding view all around with cameras in hand!

presentation with a wealth of unique period images, post-cards,  glass-plate negatives, and the well-preserved, functioning cameras, enlargers and darkroom equipment in honor of the historic work by Josef and František Seidel. This outstanding collection is enhanced even further by Seidel’s personal notes, diaries, customer records, and the original furniture and fixtures in the house.

– A host of awesome optional activities during free time (e-mail for daily itinerary and pricing): 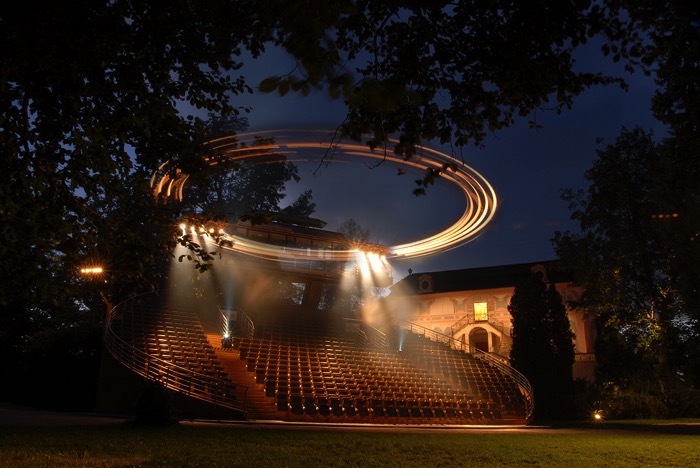 – Kayak the Vltava River: Take an easy and short float through on the iconic river that winds its way through Cesky Krumlov.

– Hike to the Divci Kamen Castle Ruins: A short drive from 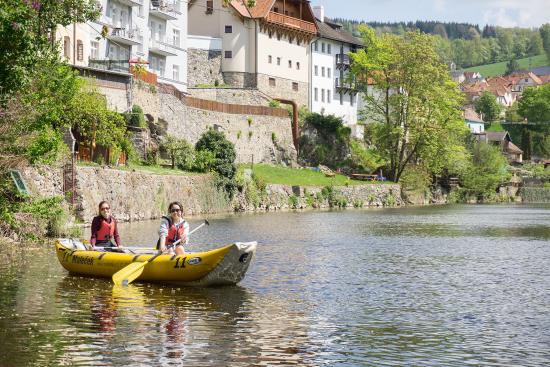 Cesky Krumlov takes us to a small village where an easy-moderate trail allows for an unique hike to the ruins of this medieval castle.

– Kutna Hora: En route to Prague we’ll explore the beauty of this former epicenter of wealth & royalty that rivaled Prague for centuries.

“Enriched by the silver ore that veined the surrounding hills, the medieval city of Kutná Hora became the seat of Wenceslas II’sroyal mint in 1308, producing silver groschen that were then the hard currency of Central Europe. Boom-time Kutná Hora rivalled Prague in importance, but by the 16th century the mines began to run dry, and its demise was hastened by the Thirty Years’ War and 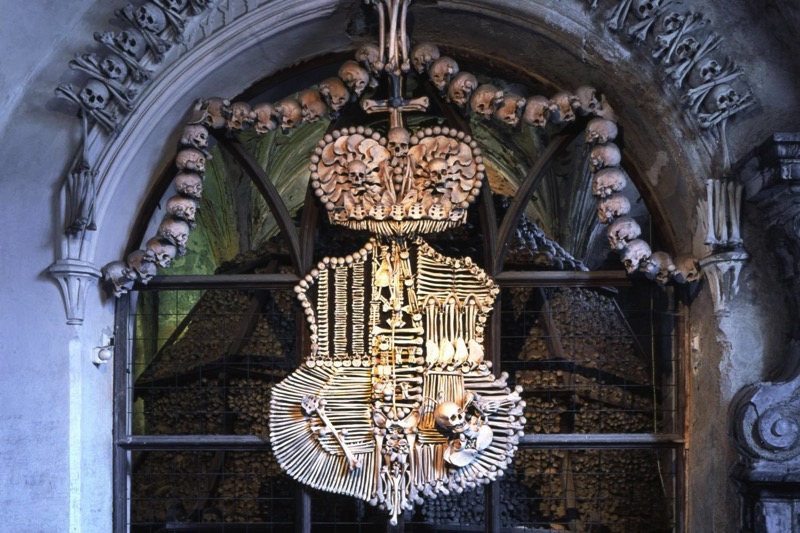 a devastating fire in 1770. The town became a Unesco World Heritage Site in 1996, luring visitors with a smorgasbord of historic sights. It looks its flower-bedecked best in May and June but is worth a full day’s visit at any time of year.” – Lonely Planet

– Privately guided city tour throughout Kutna Hora:: Highlights include the Gothic Cathedral of St. Barbara, Assumption of Our Lady and St John the Baptist Cathedral , and the Little All Saints Church situated in the middle of a picturesque cemetery, famous for its elaborate ossuary decorated with the skulls of former monks! 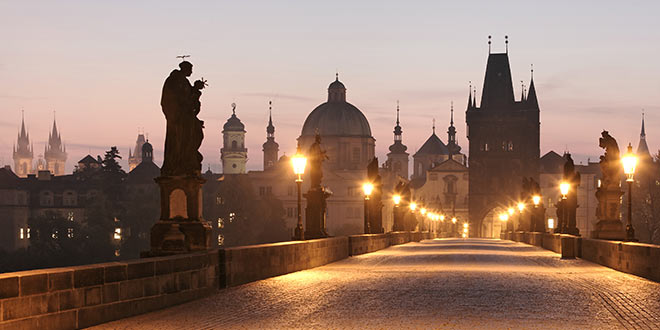 “The City of a Thousand Spires has seen it all. Centuries of Bohemian kings, classical composers, invading Nazis, Soviet tanks and Velvet Revolutionaries have passed over Prague’s cobblestones, and the spires survived it all, creating one of Europe’s most romantic and beautiful skylines. Stroll the Charles Bridge at dusk or get lost in a labyrinth of picturesque, medieval, cobbled streets in the Old City to discover what makes this Baroque jewel so alluring.” – Frommers – Jewish Quarter: Filled with culture, history, and architecture. An iconic treasure of the city

– Atmospheric 15th Century Charles Bridge: One of the most famous bridges in Europe crossing the Vltava river connects the Castle Quarter with the rest of the city. 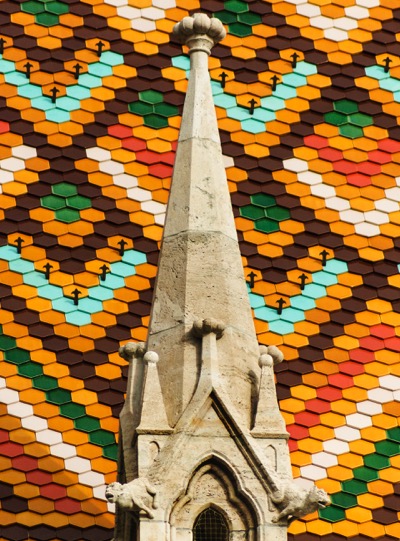 “Budapest has something for everyone – from dramatic history and flamboyant architecture to healing thermal waters and a nightlife that is unrivaled in Eastern and Central Europe.” – Lonely Planet “Architecturally stunning Budapest is a tour de force of Hapsburg splendor, best appreciated over rich cream cakes in a chandelier-lit Gerbeaud coffee house or a sumptuous steam in a Gellért thermal bath. Free of its communist shackles, a dynamic cultural undercurrent once again flows freely down the Danube and across the city’s grandly designed boulevards.” – Frommers 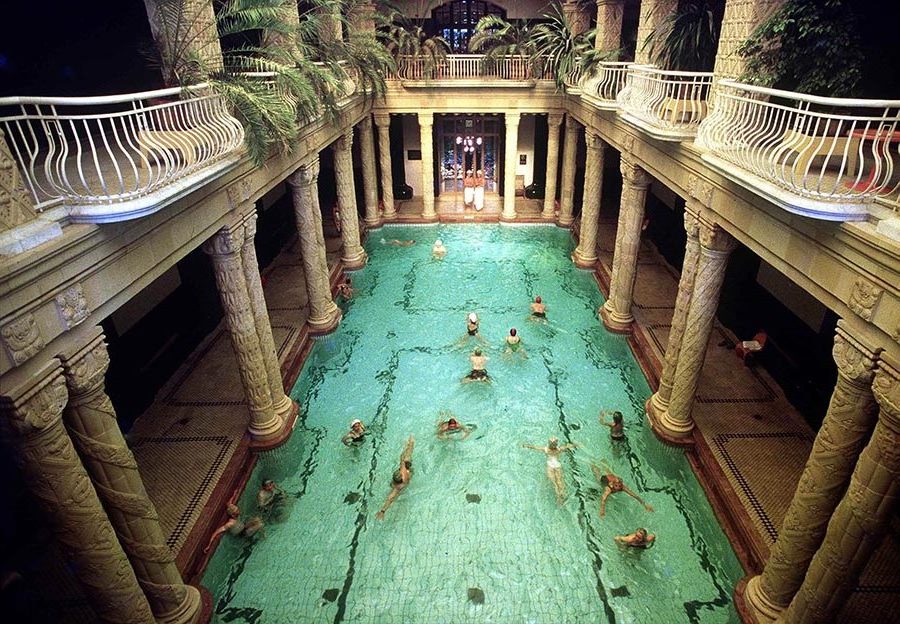 – Relax and soak in Budapest’s famous Gellert Thermal Baths: Known world-wide, the baths were built in the Art Nouveau style and opened  in 1918. 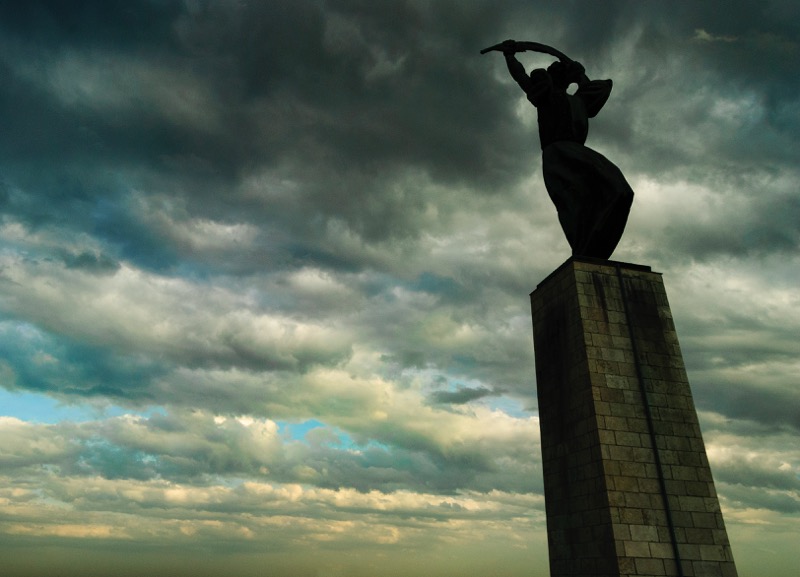 “Extending roughly 80km like a skinny, lopsided paprika, at first glance Lake Balaton seems to simply be a happy, sunny expanse of opaque tourmaline-colored water in which to play. But step beyond the beaches of Europe’s biggest and shallowest body 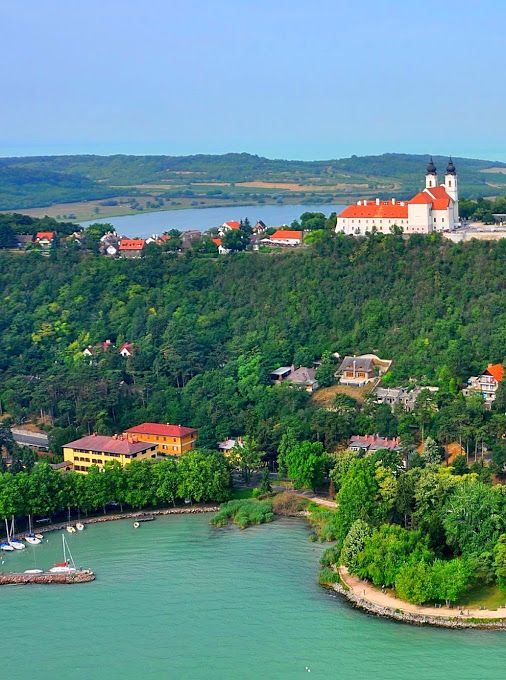 of water and you’ll encounter vine-filled forested hills, a national park and a wild peninsula jutting out 4km, nearly cutting the lake in half. Oh, and did we mention a hilltop fairy-tale fortress?” -Lonely Planet

– Veszprém: First stop takes us to the ’Northern capital’ of Balaton, with an impressive castle & the beautiful Basilica of St Michael on Castle Hill.

– Balatonfüred: Next stop is the delightful resort and spa town on Hungary’s largest lake where we’ll visit the Old Hospital, 19th Century Old Town Harbor, Round Church, Kossuth Spring, & The Park of Celebrities, with statues of poets, politicians and scientists.

– Tihany & her 1000 year old Abbey: We’ll discover the 11th century abbey and photograph the magnificent views of the lake from the hill this 11th century gem is perched upon. 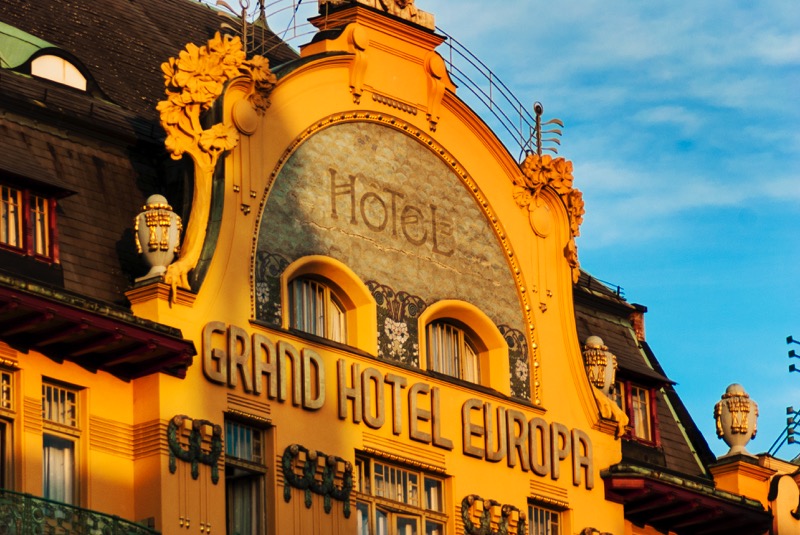 * International Airfare is not included. We are happy to help you find a good flight as always! (Flying into Krakow (KRK) & Departing from Budapest (BUD)